There were several stories about how the tradition began, but after at least two decades, a group of 10-20 friends still gathered each April 1st at an outdoor café in Washington, DC to prank the passerby with the wallet gag.

The wallet gag: Tie a length of fishing line to the hinge corner of a well-used billfold – 8-10 lb. test monofilament will do – and then tape the torn-off corner of a $20 or $50 bill to an inside edge, letting the number stick out plainly. The wallet is discreetly pushed out to a sidewalk. Then you wait.

We called it “trolling for suckers” and it evolved into a half-day event that stretched from lunch hour to rush hour. There were kazoos, whistles and other assorted noisemakers, a rubber chicken and a significant bar tab. When a passerby reached for the wallet, he or she came up empty-handed to a soundblast of semi-musical mockery and a rubber chicken, loosed from the awning, flopping at face level with a rope around its neck.

We had only one general rule for the afternoon. Prank only the sentient and hurt nobody. Okay, two rules. So when someone whispered “cardiac,” it meant a frail person was approaching. The wallet could stay out, but the chicken stayed in its roost and the noise was reduced to sober-like human sounds. Yes, we profiled our prospects. It was our duty as responsible adults.

So there she was strolling, a woman in her 80s with a cane, a heavy coat for the early spring chill. The “cardiac” warning had made the rounds and we waited. She reached and watched the wallet skate under the railing. She rose up only halfway and stared as the chuckles and “April Fools” calls greeted her.

But no smile. Instead she rose upright, clutching her chest. The cane tip shot up to the hem of her coat as her hands clasped together. Her face was pained. Ours too. We fell silent and jumped up to steady her.

Then she smiled. A sparkling melt in her eyes and face and a laugh that said “Gotcha.” So we breathed. Then we understood. Then we applauded. One of our ringleaders at the rail leaned over to shake her hand for a job well done. She gripped and pulled back in a start as his joke-shop hand buzzer went off in her palm. Then we all laughed together.

Bob Garfield rarely rails into my earbuds, but his Feb. 6 podcast of NPR’s On the Media was an exception. After playing a series of newscast clips of anchors teasing stories on the growing “debate” about vaccines, he erupted.

“For crying out loud, there is no controversy. There is no debate,” said Garfield, emphasis in the transcript. “Cynical politicians like Rand Paul and Chris Christie may pander all they want to frightened moms and the tinfoil-hat crowd–just as 49 US Senators can deny man’s role in climate change. But there is no rational basis for their beliefs. They are simply wrong — and when the media frame such idiocy as one side of a debate, they are not only legitimizing ignorance and demagoguery, they are threatening the lives of children.”

Garfield’s boil was followed a few days later by the announcement of Jon Stewart’s retirement. And I was immediately reminded of his 2004 takedown of CNN’s crossfire. Stewart did his own quiet railing that day, telling Paul Begala and Tucker Carlson to “stop hurting America” by reducing serious issues to predictable daily doses of partisan rant.

Of course Stewart and Garfield aren’t complaining about the same thing. Issues deserve debate and Stewart’s point is they deserve nuance rather than a 30-minute squeeze through the cable hack funnel. END_OF_DOCUMENT_TOKEN_TO_BE_REPLACED

Politico’s intention to expand its reporting business beyond Washington and New York comes at a time when news coverage of statehouses across the country is in steep decline. And that’s only one of a several good reasons for expansion.

The Pew Research Center reported in July full-time coverage of state legislatures has dropped 35 percent in little more than a decade. The Center’s census of statehouse reporters showed that 741 full-time journalists are assigned to statehouses, but nearly 100 of those are in Texas and California alone. (For a look at the overall decline of beat reporting, check out this recent episode of On the Media.)

Leveraging news to sell products or raise your profile with the news media and other audiences through search is generally called newsjacking. The name implies a possibility to actually take over or steal the news. But the process is actually more like hopping a freight train; a simple way for brands, individuals, organizations and causes to hang on for the ride as a news story cycles through to its end.

Strategist and author David Meerman Scott (probably best known as the author of Marketing Lessons from the Grateful Dead) wrote a book about how it works and said, “It creates a level playing field—literally anyone can newsjack—but, that new level favors players who are observant, quick to react, and skilled at communicating.”

It’s important to be all three. Your communications skills don’t matter if your timing is wrong, and seeing the opportunity is useless if you don’t have the skills. It’s even worse if you even occasionally act clueless. END_OF_DOCUMENT_TOKEN_TO_BE_REPLACED

The low-hanging fruit in any effort to improve marketing and targeting is SEO, search engine optimization. Though SEO can become wonderfully geeky, for most clients, the advice and the work is simple: use keywords in content and headlines, the kind of words and phrases that you would enter into a Google search box yourself to find content like yours.

The best optimization is neither free nor simple, but most clients haven’t done the free and simple, so proving the worth of SEO is generally painless.

But even gratis efforts to push and pull content could become much trickier in the coming year for clients with international interests. END_OF_DOCUMENT_TOKEN_TO_BE_REPLACED

We know “a lie travels halfway around the world before the truth can get its boots on.” Most people attribute the quote to Mark Twain, even though it’s not true. We like the quote because it indicates truth is in motion; trailing the lie but revving to catch up.

A better quote for our political times may be the variously attributed, “A lie told often enough will be believed.” You’d think with an approval rating of around 13 percent, members of Congress would lose the inclination to lie or smear. END_OF_DOCUMENT_TOKEN_TO_BE_REPLACED 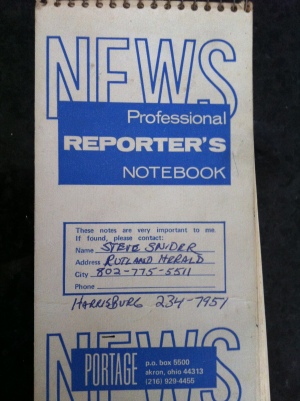 Thirty-five years ago this week, a spokesman for the Three Mile Island nuclear power plant announced that radioactive gas from one of two reactors on an island in the Susquehanna River had been released.

The next day, I was in Harrisburg, PA, a reporter from the Rutland Herald’s Vermont Press Bureau sent 400 miles down I-87 to Harrisburg, Pa. to report the story. It was a typical move for an operation that consistently punched above its weight class. Nuclear power had become a huge issue in New England and my having zero experience reporting on the technology didn’t matter to my editor. END_OF_DOCUMENT_TOKEN_TO_BE_REPLACED

I think this is the last time I will think about Fred Phelps for a long while. I’ve only written about him one time, back when the Supreme Court was considering restricting the access he and his followers had to picket funerals. I said yes, the Court said no. My point was the same as my favorite constitutional lawyer Walter Dellinger – picketing funerals is a deliberate attempt to incite violence, not a form of protected speech.

The families of the deceased agreed as well, most of them the loved ones of service members, though the Phelps crew picketed almost randomly; schools, Billy Graham appearances, the funerals of Bob Hope and Fred Rogers.

At funerals, it wasn’t just picketing. Imagine vicious interruptions of solemn services with chants of hatred against your Dad or brother or son or daughter, with your grandmother in tears. It was less an invitation to violence than a dare.

I had that perspective on Phelps and more. END_OF_DOCUMENT_TOKEN_TO_BE_REPLACED

The old model of public relations involved hiring flaks and marketers to persuade print, TV and radio journalists to cover you. Hiring one set of gatekeepers to guide you through another made sense back in the day. In a three-channel TV town with two dailies, maybe 3-5 weeklies, several radio stations and a monster-sized market share of consumer eyes and ears, you needed all the help you could get.

They called those pieces of media by names that indicated the scarce resource they controlled. Print filled its newshole and display space, radio the quarter hours and television by daypart. And almost everyone paid attention.

And now…not so much. END_OF_DOCUMENT_TOKEN_TO_BE_REPLACED

If you are a public affairs or media shop advocating issues, promoting products or services, or the expertise of your clients or organizations, don’t Tweet until you’re ready. Twitter at its best is an invitation; a hand outstretched with the keys to the car, the trailer that primes your heart for the movie, a whiff of Thanksgiving in chilly air. It’s a hint of what’s available, even a promise of what you’ll find if you follow.

I click into a fresh take from individuals all the time; people who Tweet as I do – broad subjects from general interest reading and viewing. Rank and Ronin and all in between, it’s a spin for the joy of intellectual discovery the way Pandora or Spotify are with music.

But for organizations, different expectations. END_OF_DOCUMENT_TOKEN_TO_BE_REPLACED