In the late 1990s, Fred Phelps’ Westboro Baptist Church posted a news release to its site announcing plans to picket the funeral of my father, Dick Snider. My Dad was a Topeka newspaper columnist for many years, writing 750-word takes three days a week on politics and local characters past and present, taking not a few pokes at the pompous and self-dealing. Phelps and his picketers were a Topeka staple for years before going national to spread their targets of hate and ending up as plaintiffs in Snyder v. Phelps. The Supreme Court will hear an appeal today from the father of Marine Lance Cpl. Matthew Snyder to reinstate a $5 million judgment won against the Phelps group after they picketed Matthew’s funeral. Snyder was killed in Iraq.

My father said Phelps started targeting him for columns that chided Topeka authorities for allowing the picketers to roam the city in placard-waving packs to harass “accused” homosexuals. A newspaper profile of Dick Snider when he turned 80 put it this way: “As a youngster in Oakwood, Okla., the local chapter of the Ku Klux Klan burned a cross at the Snider family home, forcing one of the few Roman Catholic families in the small town to move elsewhere. Little wonder why Snider maintains little tolerance for fools and bigots.”

In that same profile, I was quoted in the family manner, welcoming the Phelps picket to my Dad’s eventual funeral, saying that at least there would be a crowd at Mass. And there was. As we drove down Southwest Jackson in the funeral limousine in November 2004, there, on the grounds of the state capitol across from the church where my parents were married and my father would be eulogized by my son, stood a couple dozen people — most with my Dad’s photo stapled on fence posts and thrust into the air along with signs like “Fag Media Will Burn” and “Dick Snider Has Gone to Hell.”

I took it in my own way, imagining it was the same way my father would. I lingered outside and imagined him framing one of the signs and showing it off on the wall of his basement office. I wished I’d brought a camera. And I also lingered to make sure none of the family and friends crossed the street or remembered their trunks were stocked with shot and shell for pheasant season.

Today, when the justices hear the case, Fred’s daughter Margie will say the pickets are protected speech, backed by briefs from the ACLU and many others. And in an opposing brief, Walter Dellinger will have called the pickets by a label I relate to better: “emotional terrorism.” Signs like “Thank God for Dead Soldiers” at funeral services are pure incitement. That’s their point. People who polarize for their own advancement continually raise the dose of vitriol to test our tolerance, to maintain their visibility; from the language and images in culture to the use of “socialist” and “Nazi” in politics. In this atmosphere, it’s the lines we draw that matter — how we respond when hate incites us and even organizes us.

A Supreme Court victory for the family of Lance Cpl. Snyder is not the latest beginning of the end for free speech. It may be just what we need to spotlight the marketers of polarization and say “enough.” 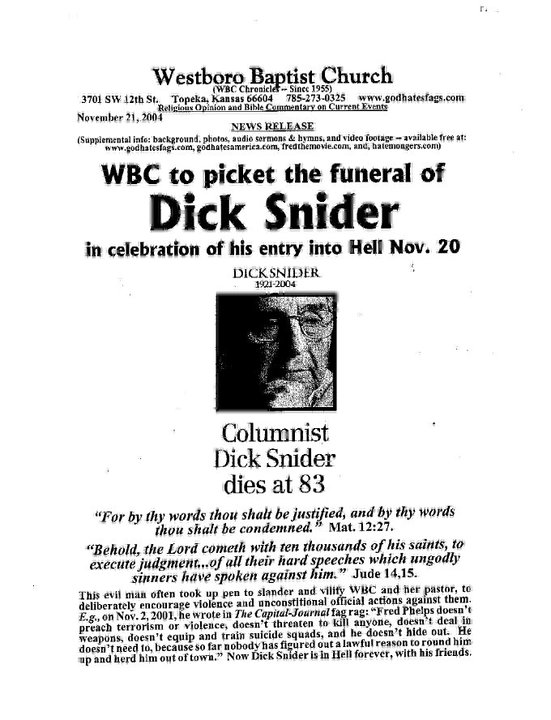 Steve Snider is the son of the late Dick Snider and an associate director at the National Education Association.